Ocellaris Clownfish are a type of saltwater fish and make their homes near sea anemones, which have been featured in the films "Finding Nemo" and "Finding Dory." The Ocellaris Clownfish, also known as False Clownfish or Clown Anemonefish, are popular aquarium pets, and they come in a variety of colors, including pink, red, yellow, black, brown, and multi-colored stripes.

Ocellaris Clownfish are typically orange to reddish-brown with three white bands spanning from the head to the body. These distinctive traits can vary depending on the location your Ocellaris Clownfish comes from, or the specific traits breeders have accomplished. This is a juvenile Phantom Snowflake Clownfish, which typically starts out with a deeper orange and turns jet black once they reach 1.3 in (3.3cm). These beauties can be found in the southern part of Australia or obtained through breeders.

You can also find Ocellaris clownfish for sale here. 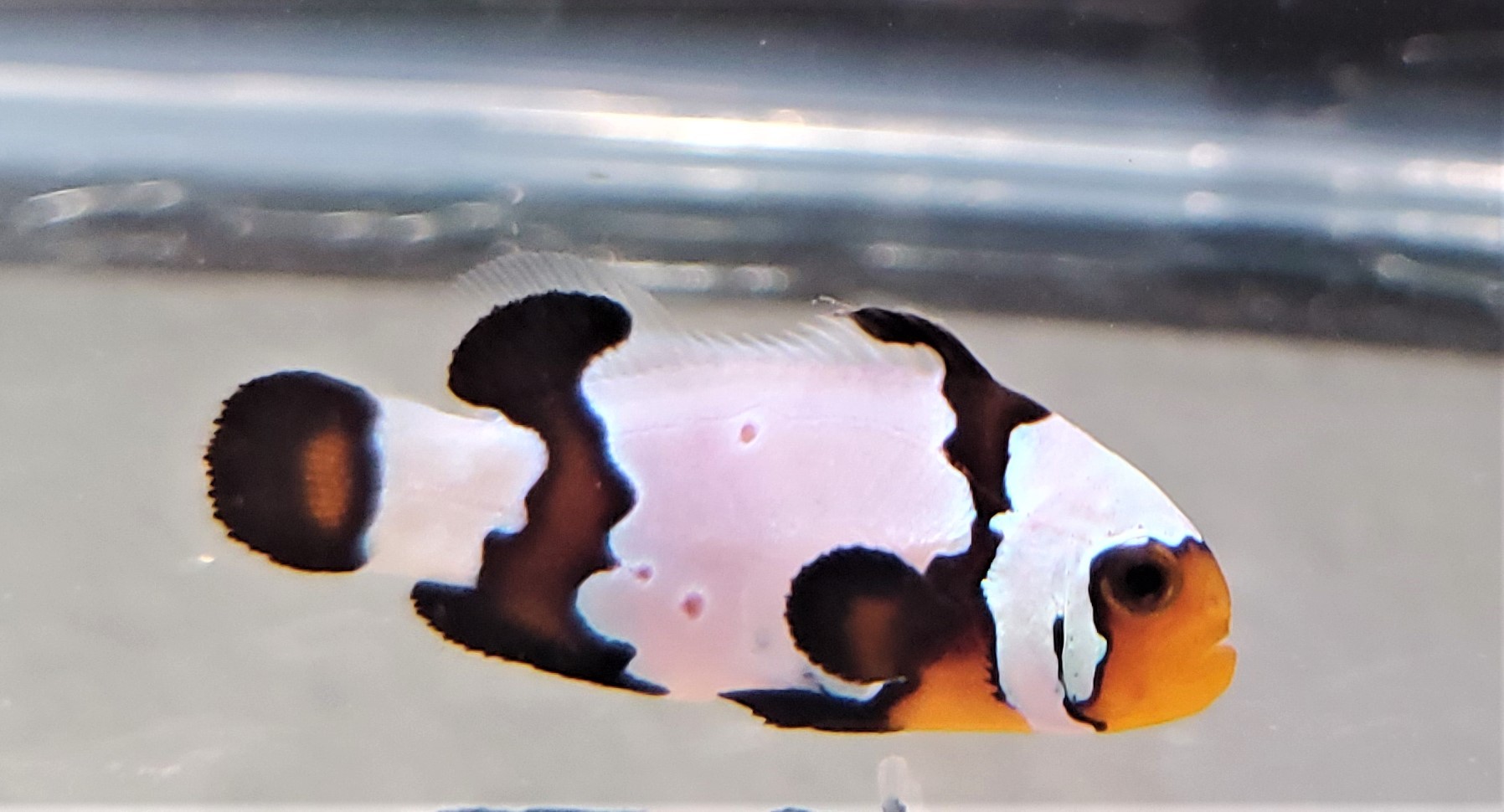 Where do Clownfish live?

Ocellaris clownfish do prefer certain types of Anemones, like the Bubble tip Anemone. 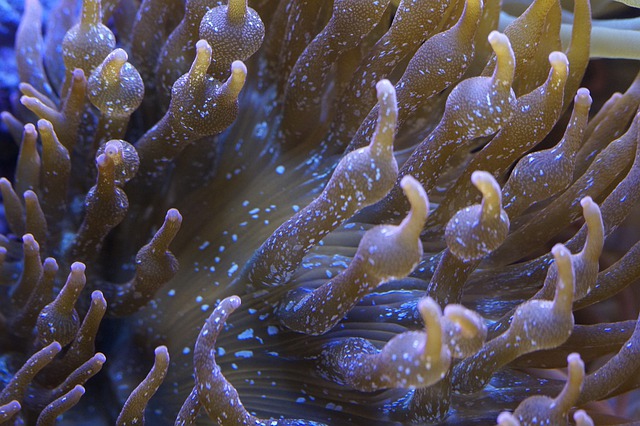 Bubble Tip Anemones come in a variety of different colors, from tan, brown, green, or bluish green. You can find other colors among Bubble tip anemones, like the rose Bubble tip anemone, however, they are considered rare and will make a dent in your wallet.

Bubble top anemones have a different appearance when compared to other Anemones, as they have a bubble that swells at the tip of their tentacle. They also administer stings to prey, to which the Ocellaris clownfish has become immune by producing a slime coat capable of enduring the stings. Though this sting is lethal to small prey like fish, they are not lethal for humans, but you should handle your Bubble tip anemone with gloves, as you will experience discomfort and potential numbing.

The behavior of the Clownfish

They are Hermaphrodites, which means the large dominant male will often turn into a large female to accommodate breeding. This change, however, is irreversible.

They prefer to dwell near sea anemones if available, if there isn't a sea anemone available they will dwell in the middle or corner at the front of your aquarium for all eyes to see. They are friendly and will swim near your hands if they have had enough exposure to humans.

They communicate by making popping and clicking noises, they use this ability to maintain rank among group members, which lessens conflict. 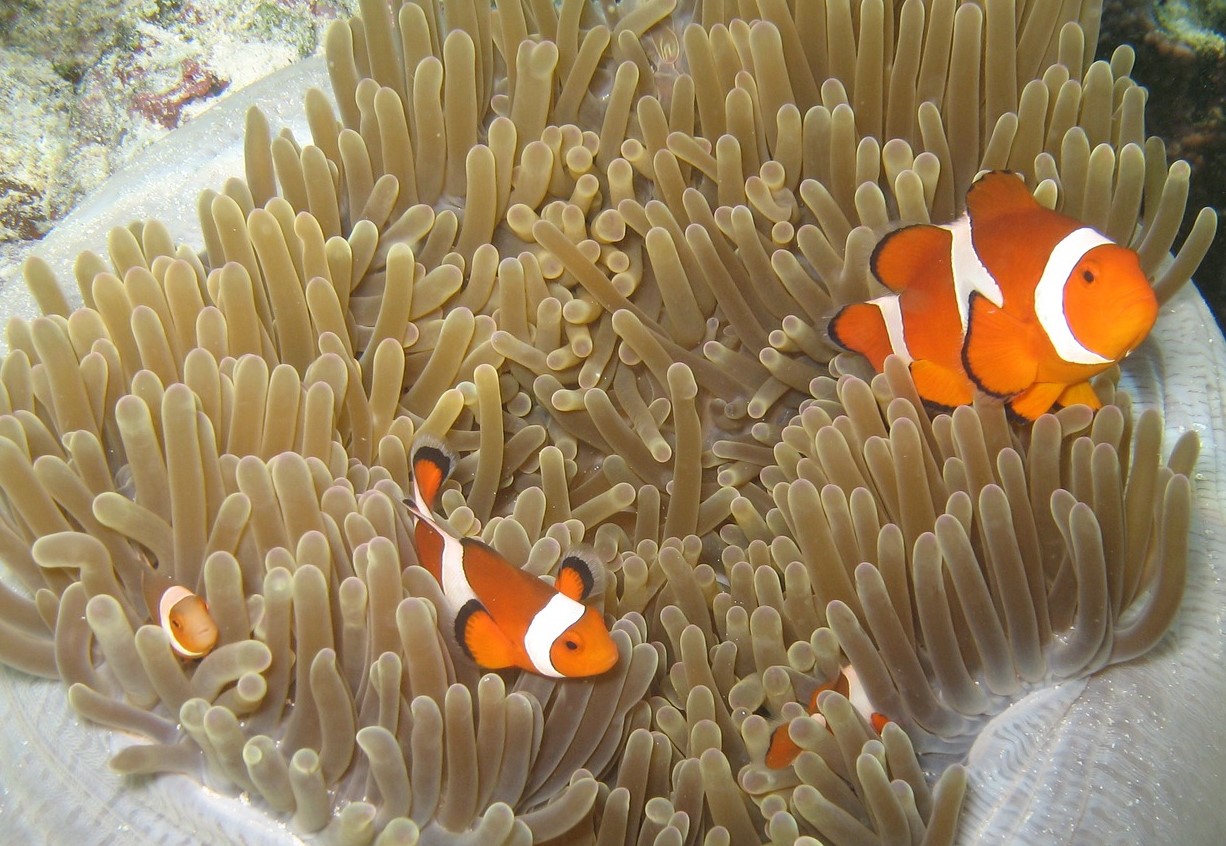 What do Clownfish eat?

Clownfish are Omnivores, as they eat equal parts algae and animals. Their diet consists of zooplankton, copepods, and algae. They have also been observed eating parasites off their host anemones.

Juveniles and smaller clownfish are more susceptible to predators, so foraging further away from their anemones becomes more dangerous, they tend to stay close to their anemone friends. Larger adult Clownfish will travel further distances when foraging for food, but it is never more than a few feet from their anemone.

Male Clownfish will court the female by rubbing up on her, pecking at her, and generally trying to touch her. The female Clownfish will then bite the sides of his face to indicate she is ready. The male Clownfish would then release a cloud of bubbles, letting her know he is prepared to mate. Afterward, they will begin looking for a suitable place to lay eggs.

They are external breeders, meaning the female will lay thousands of eggs, and the male fertilizes them. If there are eggs that have failed to become fertilize, the male will eat them. Once the eggs have been laid, they will now begin defending their eggs from predators. The female near instantly will go into feeding mode, whereas the male will diligently start to defend the eggs. Clownfish will attack and bite any predators that come close, while there are no predators, he will clean any debris that has settled on the eggs.

Once the eggs have matured, they will spawn as larvae and drift as plankton. If they survive this step, they will take from 8 to 16 days to settle and mature from tiny transparent plankton, to the beautiful orange-stripped clownfish we know and love. Once settled, they will then begin searching for an anemone, and joining an already established group to reproduce.

How long do clownfish live?

Typically wild Clownfish live for 6-10 years, and captive-bred clownfish live for 3-10 years. Though this will vary depending on the species. As clownfish have been observed living much beyond 10 years and up to 30 years, it will also depend on your water conditions, feeding habits, exposure to disease etc.

Though not declared endangered, their population has decreased in different areas around the world due to habitat loss on a massive scale. Coral reefs are the primary residence of our favorite fish friends. Coral reefs are facing sedimentation, eutrophication, exploitation of natural recourses, and global warming.

Though the clownfish is not declared endangered, it may very well be in the future. Ocellaris Clownfish make up 43% of the ornamental aquarium fish trade, while it is estimated that 75% of fish sold in the trade are wild-caught. With the increased interest in sustainability, there is an active effort to breed clownfish in captivity rather than catching them from the ocean.

You can find more Saltwater fish for sale