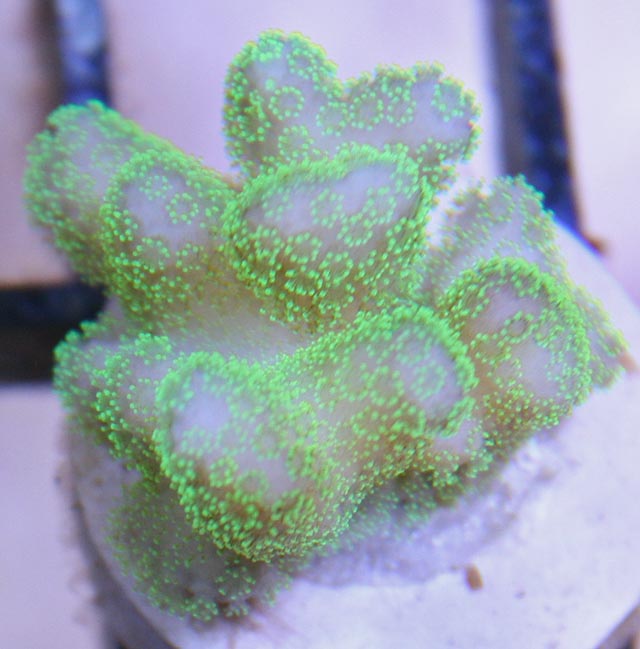 Pocilloporidae corals are one of the most popular SPS (small-polyped stony) corals</a > for the marine hobbyist, and are also a large contributor to reef building. Due to their generally hardy nature, they are recommended for beginners in SPS (small polyp stony) corals. Although all stony corals (and even some soft corals) are hermatypic, Pocilloporidae corals account the second largest of the reef builders (second only to the family Acroporidae). Pocilloporidae are commonly called bird's nest coral, since these are more common in the aquarium trade, but they also include finger coral, needle coral, bush coral, cauliflower coral, and cat's paw coral. Pocilloporidae corals are in the order Scleractinia (stony corals) and the subclass Hexacorallia (or also known as Zoantharia). Being in the Hexacorallia subclass means that the polyps have tentacles in multiples of six. 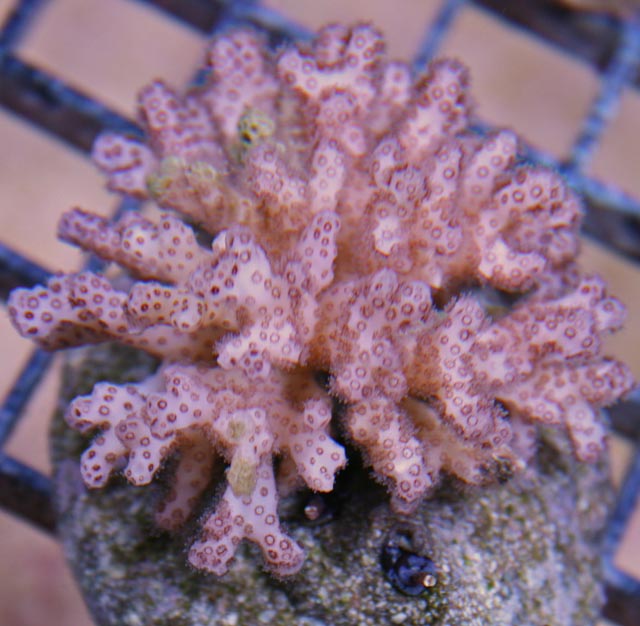 Pocilloporidae corals are polytrophic. They gain their energy from their zooxanthellae (dinoflagellate algae) and from capturing prey such as zooplankton. They cannot survive on photosynthesis alone. However, that being said, you will not need to directly feed these corals. If there is a healthy planktonic population</a >, it will be enough to sustain your Pocilloporidae coral. Most agree that brine shrimp and pureed meaty aquarium supplements are still too large for them. Many aquarists have success with a refugium/sump to encourage the growth of plankton. Pocilloporidae can then feed on zooplankton such as amphipods or dinoflagellates. Some hobbyists may experience a large bird's nest coral that will die off at the center due to lack of food (reminiscent of a poorly pruned shrub). Salty Underground has found that stronger currents help to feed the inner branches of the colony.

As collectors and biologists continue to research coral reefs, some of our taxonomic trees change. There are two genera in Pocilloporidae that have been alternatively placed in the family Astrocoeniidae. These are Madacris and Palauastrea. Both are quite uncommon in the aquarium trade. Madracis auretenra, the yellow finger coral, for example, is quite beautiful. It is found in the Atlantic where most species are protected from collection. On the other hand, some species like Madracis asanoi have so few records that it is impossible to determine the impact of collection. This species is also found at depths greater than 50m, so it is also less likely to be collected and exported. Palauastrea ramosa has been placed on the IUCN threatened species list</a > despite a lack of knowledge about its population. It is found off the coast of southern Japan, Indonesia, and southwestern Australia. However, due to the general decline of coral reef habitat, it is considered to be threatened. As both genera are currently listed with the family Astrocoeniidae</a >, they will not be covered in detail at this time.

Common names for Pocillopora are bush coral, bird's nest coral, cluster coral, and cauliflower coral. They can be cream, brown, pink, purple, green, and sometimes blue. The pink coloration of many Pocillopora spp. is caused by the pigment pocilloporin. They have as many growth forms as common names. Depending on which sources you read, there are estimated to be between 5 and 20 extant species of Pocillopora coral. They prefer high light intensity and strong water current. This is evidenced by their proliferation on reef flats, reef crests, and upper reef slopes. Some species tolerate exposure at low tide. For the most part, cauliflower corals are found throughout the Indo-Pacific. However, Pocillopora fungiformus is found only off of the coast of Madagascar, and is considered to be endangered by the IUCN</a >.

In general, Pocillopora spp. are considered to be hardy (more forgiving even than Stylophora). You will find many available through aquaculture</a >, as they propagate well in captivity. Wholesalers have found fragmentation and sexual and asexual reproduction via planulae to be quite successful. In fact, the planulae can detach from the substrate and move elsewhere in search of more ideal conditions. Due to its success in captivity, it is suggested to be a beginner coral for anyone making the trip from soft corals to stony corals.

Common names for Seriatopora corals are needle coral, bird's nest coral, and brush coral. Bird's nest corals are distinguished from the rest of the family by their thinner, interwoven branches that may taper to a “needle” shape or be blunter, depending on the species. Their polyps are in regular rows on the branches. There are estimated to be between 2 and 10 extant species of Seriatopora. Typically, they are brown and cream colored, due to their zooxanthellae, but they can also be pink, green, or yellow due to other pigments. Darker and less bright varieties prefer deeper waters and lower light intensity, as is typical of most species. They are widespread in the Indo-Pacific. Although most Seriatopora corals are considered vulnerable or threatened</a >, the most popular species, S. hystrix (thin bird's nest coral),</em > is considered to be of least concern.

In nature, thin bird's nest corals are found in shallow, turbid waters, like those found on reef flats. Other species in this genus can be found in more protected waters, like under overhangs, on upper back reef slopes, or even in lagoons. Seriatopora spp. require moderate care, moderate to high light intensity, and moderate to high water current. If lighting is too high, the colony may become too pale. If the current is too strong, the branches will thicken, losing the attractive needlelike appearance of the branches. Imported specimens have more trouble with acclimating to water conditions, so an aquacultured variety is recommended</a >. They propagate well through asexual fragmentation, so it should not be difficult to find a captive bred variety. 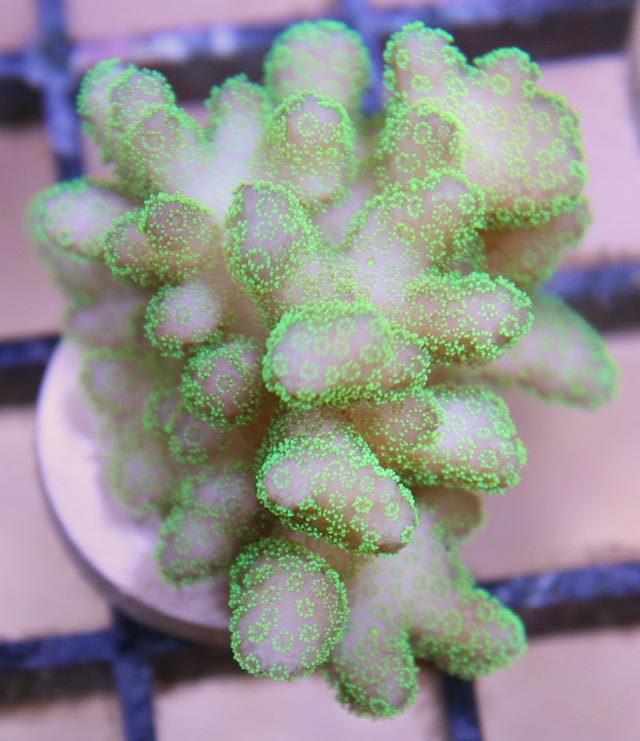 Common names for Stylophora corals are cat's paw coral, bird's nest coral, finger coral, and smooth cauliflower coral. Stylophora corals are considered hardy by most, but Salty Underground considers them to require moderate care. They need high light intensity and strong water current. This is reminiscent of their usual habitat found in shallow reef environments like the reef flats, reef crests, or upper reef slopes. They can be quite colorful, coming in bright greens, pinks, oranges, and purples. Generally speaking, if a Stylophora coral is brown or dark green, it is a species which prefers deeper habitats. The polyps are usually contrasting with the colors of the branches.

Branches may be thick or thin depending on water current. Species of gall crab, Hapalocacinus sp., can change the shape of the branches, making them club-like. The polyps and their calices are submerged in the skeleton (coenosteum), which is covered by spines called spinules. Since their polyps are submerged, when extended they contribute to Stylophora's fuzzy appearance.

S. pistillata is the most popular Stylophora coral, but it is now considered threatened</a >.It is highly recommended to find an aquacultured variety for your hobby.</a > Fortunately, they propagate quickly via asexual fragmentation and reproduction via the release of planulae (larvae) which may be sexual or asexual. Although they are widely considered to be passive, Stylophora will form sweeper tentacles at night. Give them room in your aquarium to compensate for their fast growth.