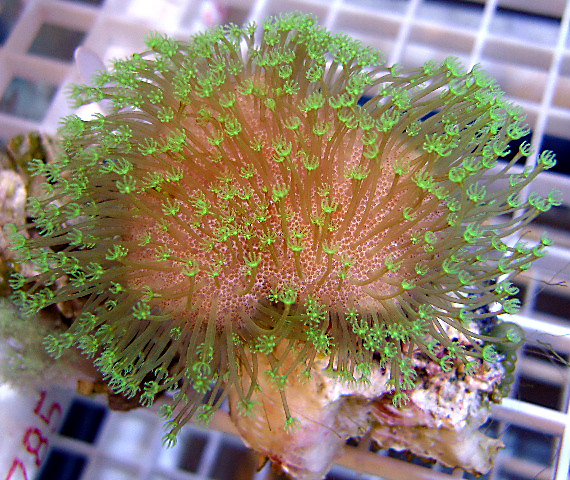 Leather corals are found in the Subclass Octocorallia, Order Alcyonacea, Suborder Alcyoniina, and Family Alcyoniidae. The corals found in Alcyonacea are non-reef building due to their lack of a skeleton produced from calcium carbonate. Like all octocorals, leather corals have eight tentacles and eight mesentaries on their polyps. They lack the skeletons of the stony corals, but leather corals do have sclerites, small calcite pieces set throughout their bodies. Even though they are not considered hermatypic, their bodies do shed the sclerites when they die, contributing indirectly to a coral reef. 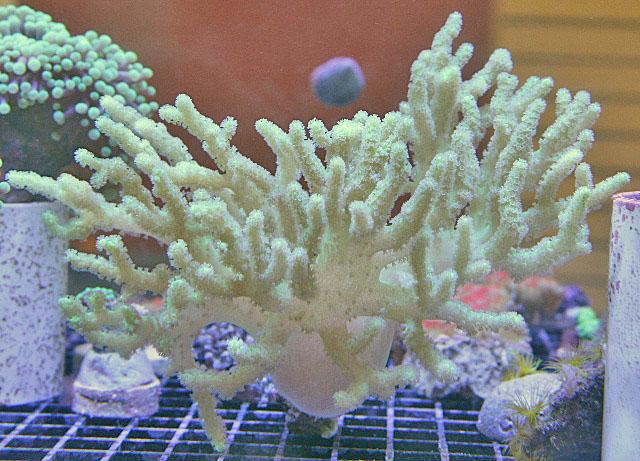 Leather corals, Alcyoniidae, are set apart from the other octocorals by their leathery skin. Common morphologies seen in leather corals are thick encrusting, arborescent, and lobed. Their polyps are attached to the coenencheyme, a tissue that is both an anchor and sometimes stalk for the polyps. It is comprised of a connective tissue called mesoglea, which has a lot of empty space in its tissue. This tissue is what gives the coenencheyme its form, being simultaneously stiff and gelatinous (It reminds me of stale gelatin.). 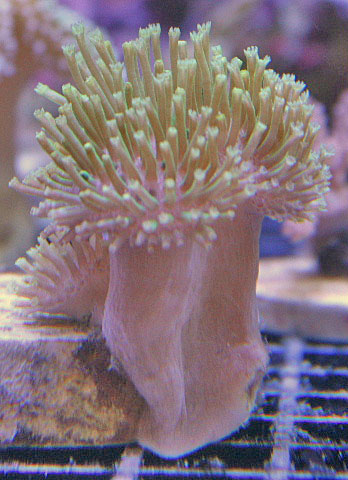 Alcyoniidae corals have zooxanthellae, but they still rely on other food sources. They still capture prey, just like the stony corals, but they feed on much smaller forms of plankton, like phytoplankton, nanoplankton, and bacterioplankton. Because of their shape, they don't necessarily capture prey in the same manner. Most do not have nematocysts. Instead, their tentacles have microvilli covering their epidermal layer which are great for absorbing nutrients. Because of their particular feeding habits, it isn't necessary to directly feed leather corals. The zooxanthellae provide nutrients via photosynthesis, and the polyps will absorb microplankton directly from the water. At Salty Underground, we've found some leather corals will thrive in the absence of a skimmer. This allows more free floating nutrients to stay in the water. 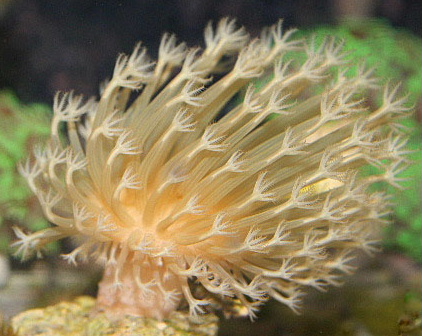 For the leather corals, they may have two specialized polyps, autozooids (the feeding polyps) and siphonozoids (polyps responsible for water circulation). If the coral only has autozoids, they are commonly called monomorphic. A few genera of the leather corals have both types of polyps, and they are referred to as dimorphic. Solenia, canals within the coral, connect the various polyps and foster movement of nutrients.

Leather corals are particularly hardy and are ideal for a beginner aquarist</a >. There are some precautions to be taken, however. Be careful not to have fire corals near any soft coral in your aquarium, as the fire coral, Millepora sp., will encrust over the living tissue of the soft coral. Also, some soft corals are highly toxic and hobbyists should beware of including stony and soft corals in the same aquarium.

Common names for Alcyonium sp. are finger leather coral, colt coral, seaman's coral, & encrusting leather coral. This genus of leather corals is mostly encrusting or lobed in form, as well as finger like, explaining one of its common names. They are monomorphic, containing only autozooids for feeding.

Alcyonium corals are normally found in lower water currents that are slightly opaque. Their colonies are typically small. They come in a variety of colors, mainly brown, green, yellow, red, and orange. When Alyconium sp. are in stronger currents, their encrusting form is quickened.

Due to their hardy nature, as well as ease in propagation through cuttings, this is a great coral for beginner hobbyists as well as aquaculturists. Although they can be collected from the reef without any great harm, why not grow in captivity?

Common names for Cladiella sp. are finger leather coral and colt coral. These have smaller lobes than Alcyonium sp., and are heavier looking and covered with lumpy knobs. These are also monomorphic.

Cladiella corals are usually found in moderate water current and depth, notably on reef flats and back reef slopes. If you mimic medium light intensity and current in your aquarium, they should do well. However, they are also highly adaptable. Their coloration ranges from white to cream, but their polyps may be of a contrasting color, usually brown or green. Their bases are usually white, and the colony in general will be coated with mucus.

Like most leather corals, Cladiella sp. are hardy and ideal for hobbyists. They are not particularly toxic, so they will do well with a wider variety of neighbors in your aquarium. They also will grow well from cuttings, so there's no need to collect from the coral reefs.

Common names for Lobophytum sp. are finger leather coral, cabbage leather coral, lobed leather coral, and devil's hand coral. Lobophytum corals are lobed, like Alcyonium sp. and Cladiella sp., but their colonies can grow much larger, sometimes more than three feet across. In addition to the encrusting and lobed forms, Lobophytum corals can also be shaped like a bowl or a stalk. These are dimorphic, containing both autozooides and siphonozooids. Their tentacles are completely retractible. 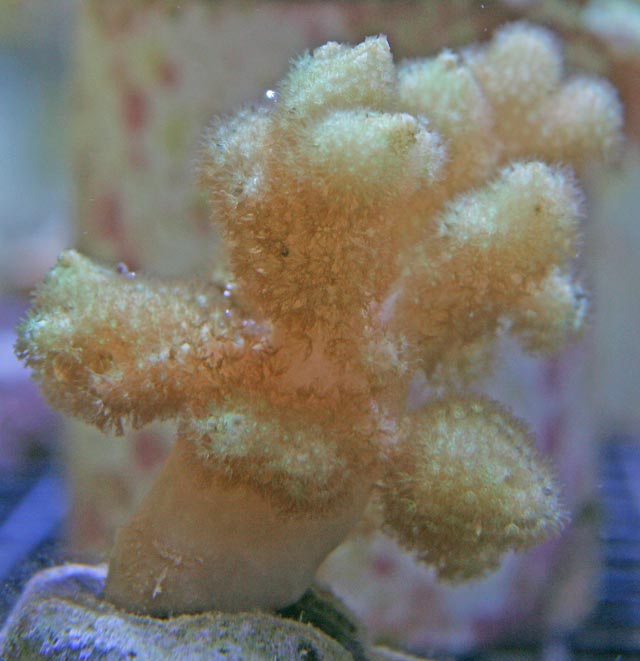 Lobophytum corals have a variety of colors, but some corals you should be able to distinguish by shade. For example, the genus will have orange, pink, green, gray, brown, cream, but L. pacuciflorum (devil's hand coral), is almost always a brownish-orange in color with white polyps. These leather corals are normally found in shallower waters, like on reef flats or near the shore. They often are exposed at low tide. This may explain their heavy mucus coatings.

Although Lobophytum sp. are quite hardy, they are difficult to keep in an aquarium specifically because they are highly toxic and their shed mucus coatings will also affect other corals. Otherwise, they adapt well to a variety of light intensities and water currents, grow quickly to large sizes, and propagate well through cuttings.

Common names for Sarcophyton sp. are leather coral, trough coral, mushroom leather coral, and toadstool coral. Don't confuse these with “mushroom corals” of the Fungiidae family or the “soft mushroom corals” of the Order Corallimorpharia. These appear different from the other leather corals because their stalks (devoid of polyps) terminate in a capitulum (mushroom-shaped top). Their capitulum begins as a smooth funnel shape, but it may become more folded as the colony ages due to water current or to aid in prey capture.

Sarcophytum corals have zooxanthellae and are also dimorphic, containing both autozooids and siphonozooids. They are mostly brown, tan, and cream, and their polyps are similarly colored, but may also be green. They do not do well in strong current, and are mostly found in reef flats and lagoons. However, they are tolerant of a variety of light intensities. This may be due to the fact that they are polytrophic (they rely on more than one type of feeding). 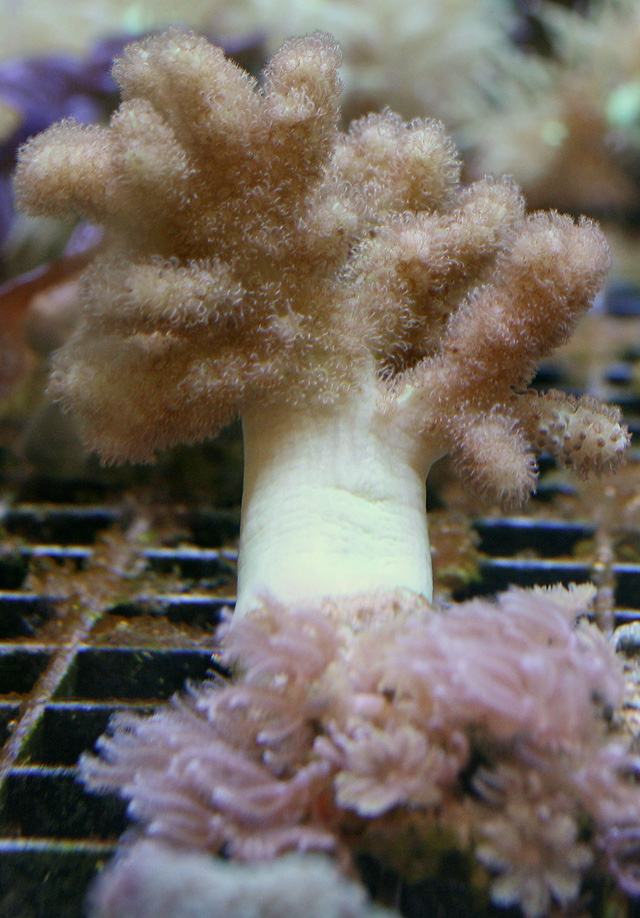 Sarcophytum corals, like all the leather corals, are very hardy and ideal for the hobbyist. They grow quickly and do not need to be directly fed. They will get their nutrients from the microplankton in the aquarium water and photosynthesis from their zooxanthellae. Beware of their toxicity, though, as their toxins are highly dangerous. Of the leather corals, they are considered one of the most dangerous to other organisms in the aquarium. Some sources list them as having more than 50 toxins, but all the facts are not known about the chemical compounds. They will shed regularly. This is a normal process of sloughing off algae and other sediment. Don't be worried, as they will reemerge larger and healthier than before. They should not be kept with clownfish, as some clownfish will inhabit a Sarcophytum sp. instead of an anemone. The leather coral will not thrive and may ultimately die if this occurs. This is a prime genus for aquaculture</a >, as they propagate well from cuttings. In fact, any piece you cut can attach to the substrate and grow a new colony. There should not be any reason to not breed these in captivity. 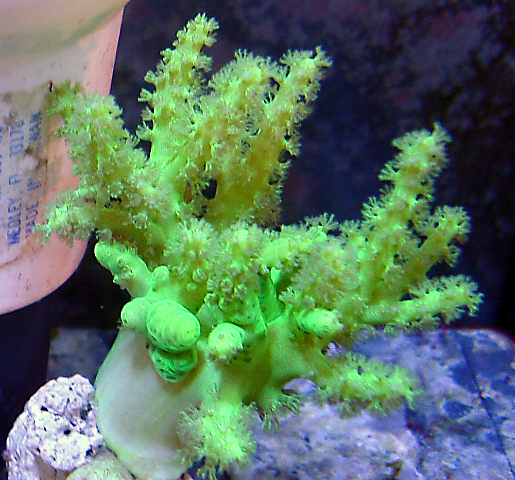 The Sinularia sp. do well in shallow water and strong current, though they adapt to a variety of both conditions. Although they are considered quite hardy, they are also quite toxic. Be careful with the combination of animals in your aquarium, as Sinularia sp. may cause damage and/or death in stony corals.

Sinularia corals will propagate through fission (a colony will split itself, forming daughter colonies), fragmentation, or by dropping branches. These methods are neither particularly fast nor predictable. Collecting from the coral reef has been shown to not be very harmful, as the Sinularia sp. are quite numerous in the wild.