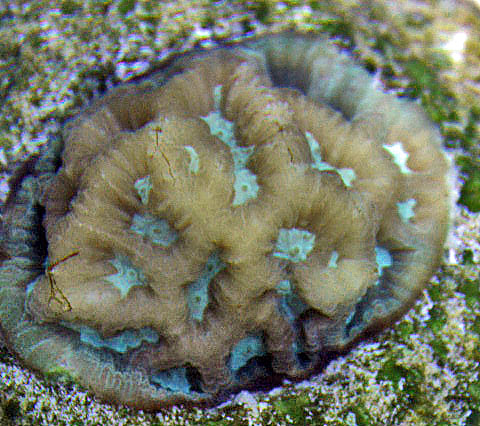 The Platygyra brain corals form huge coral colonies that are either flat or dome shaped. The coral have corallite walls that polyps share which twist and turn to give it a maze look. They do not have protruding rounded lobes originating from the septa like the Goniastrea coral but have rough septal teeth and heavy corallite walls. Platygyra can sometimes be confused with Leptoria coral which has deeper valleys and thinner corallite walls. The brain corals are commonly found in colors such as brown, green, and gray. 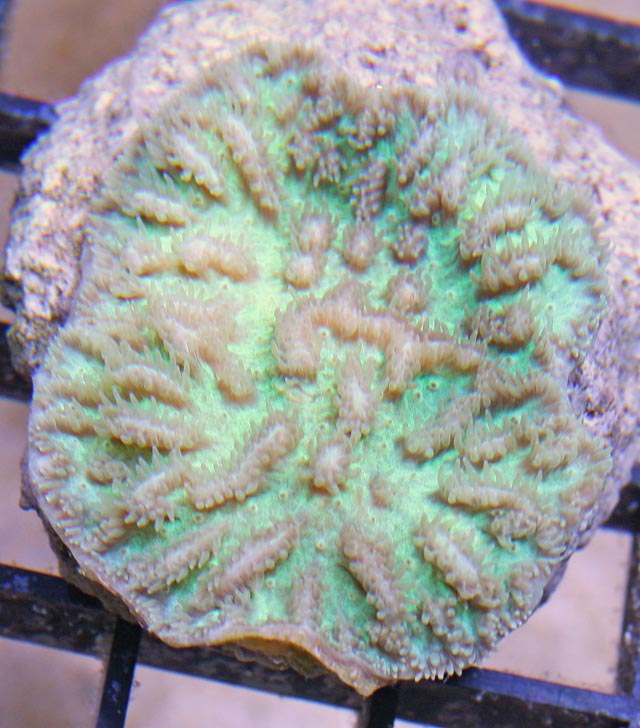 The Maze Brain coral has a moderate to easy care level but is not as hardy as other brain corals in the Favites and Goniastrea genera. They are more likely to bleach and have tissue loss but once conditions become favorable the tissue can recover the skeleton very quickly. Proper current to the Platygyra coral seems to be more important than proper lighting. Too low of a current will not allow the coral to feed and stay clean of waste. A moderately strong current that does not blast the coral is preferred. The coral can grow quite large and may want to be considered when placing the coral in the aquarium.

Lighting for the Maze Brain coral should be moderate. Lower lighting can be tolerated if the current is good but the brain coral will not grow very fast. An example of lighting that has worked very well for the Platygyra coral is under being placed in an aquarium that is 27 inches deep, off center from 400w metal halide lights that are 16 inches above the water line, and the coral being placed on the bottom.

Under proper lighting and current the Maze Brain coral can grow fairly quick and will use a lot of calcium in the aquarium. Keeping the calcium level around 400 ppm will ensure that the coral has enough calcium to grow. It can handle nitrate levels as high as 20 ppm but does best when they are very low. Phosphate levels should also be kept low for best coral growth.

The polyps have tentacles come out at night to feed but are generally short and do not threaten other nearby corals.

The Platygyra coral are like other large polyp stony (LPS) corals</a > and have several feeding methods. The corals have a symbiotic relationship with zooxanthellae (dinoflagellate algae</a >) which they receive some of their nutrients. They also capture food particles like plankton</a > from the water and can absorb dissolved organic matter.

The Brain Maze Coral can be fed at night when their tentacles are out or early morning when the lights first come on but this is not required if it is under proper aquarium conditions. If you want to feed the Maze brain coral, it can be fed meaty foods like brine shrimp, mysis shrimp, cyclopese or anything else meaty and small.