Corallimorpharia corals are typically called mushroom corals. Some hobbyists also call them disc anemones, false corals, elephant ear corals, umbrella corals, and mushroom false corals. These are not to be confused with the stony mushroom corals of Fungiidae or the mushroom leather corals of Sarcophyton spp. They are commonly called “false corals” because they are similar to the stony corals of Scleractinia and belong in the same subclass (Hexacorallia), but they lack the calcareous skeleton. 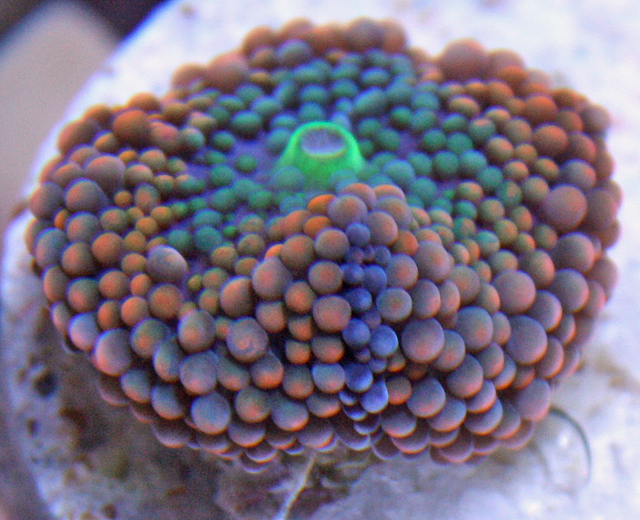 By no means is this a set taxonomy. As more genetic data becomes available, some species may be reclassified or genera combined or renamed. Not all of these genera will be covered at this time. Please scroll to the bottom of the page for more information about specific genera. In some circles, and from some collectors, wholesalers, and retailers, Actinodiscus is alternatively placed in two different families: Actinodiscidae or Discosomatidae, and is also sometimes combined with the genus Discosoma. This article will treat Actinodiscus as a separate genus for the time being.

Mushroom corals are distinct from other corals by their oral disc. This is the umbrella shaped, or flat, circular disc which surrounds their opening. Their hypostomes, or mouths, protrude (think of pursed lips), unlike other corals that have flat or concave mouths. On their discs, they do have tentacles-but they look more like little bumps, warts, or beads (these tentacles are usually referred to as papillae or verrucae). The “stalk” of the mushroom is called the column, and where it attaches to the substrate is called the pedal disc (think of it as a “foot”).

Mushroom corals are considered polytrophic. They do rely on zooxanthellae and photosynthesis for energy. In addition, many corallimorphs will absorb nutrients directly from the water. If there is an aggressive skimming process in your reef aquarium, your mushrooms may not thrive. Moreover, some mushrooms will prey on fish or other invertebrates. These piscivorous corals, notably Amplexidiscus fenestrafer, can quickly (within 3 seconds) enclose fish. Beware keeping clownfish and other anemone fish in the same aquarium with mushroom corals. 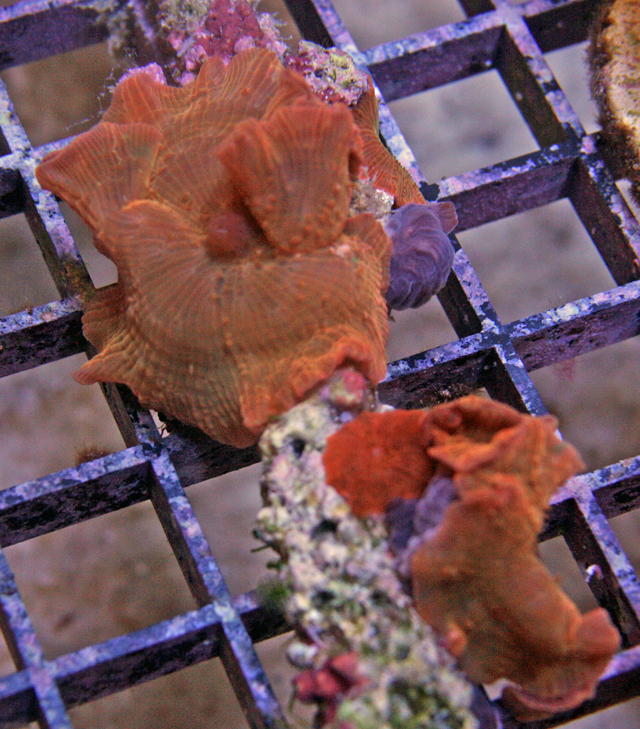 Generally speaking, false corals prefer moderate lighting intensity and moderate water current. Mushrooms are commonly found in deeper waters, shaded waters, or directly beneath other corals. If your specimen is more of a pastel color, it may be stressed due to high lighting intensity, as well as other factors. As most mushrooms are found in deeper water, high currents or fluctuations in salinity are typically not tolerated. (Corals in shallow reef environments are more acclimated to fluctuations, especially of low salinity, as they might endure a deluge of fresh water in a rainstorm.) Despite these restrictions, mushroom corals are considered rather easy to keep and ideal for “beginner” aquarists. By and large, they seem to thrive in high nutrient waters (perhaps do to their ability to absorb nutrients from the water), so slightly higher nitrate levels should not be worrisome.

Although there are some conflicting reports as to whether mushroom corals are aggressive, hobbyists should still give them space in their reef aquarium to account for growth of the colony. Additionally, mushroom corals grow quickly in ideal conditions in captivity, and will bud on a regular basis. Also, some polyps may detach from the substrate, and this is a great time to move it to a new home within your aquarium and start a second colony.

Common Species: A. cardinalis, A. mutabilis, A. striata, A. marmoratus

Common names for Actinodiscus spp. are mushrooms, mushroom anemones, disc anemones, and mushroom corals. Actinodiscus corals prefer low intensity light. These come in a variety of colors: red, orange, green, blue, purple, and some metallics. In addition, Actinodiscus spp. may be solid in hue, or heterochromatic (more than one color in pie shape), as well as spotted, splotchy, or striped. Under high intensity lighting, the zooxanthellae of Actinodiscus species may become concentrated, leading to a dull or brown colored coral and completely obscuring the natural colors of the polyp. In general, these mushrooms are not considered predatory, so it is not necessary to directly feed them. They will do just fine with photosynthesis from their zooxanthellae and direct nutrient uptake from the water. Actinodiscus may sometimes be sold as Discosoma. 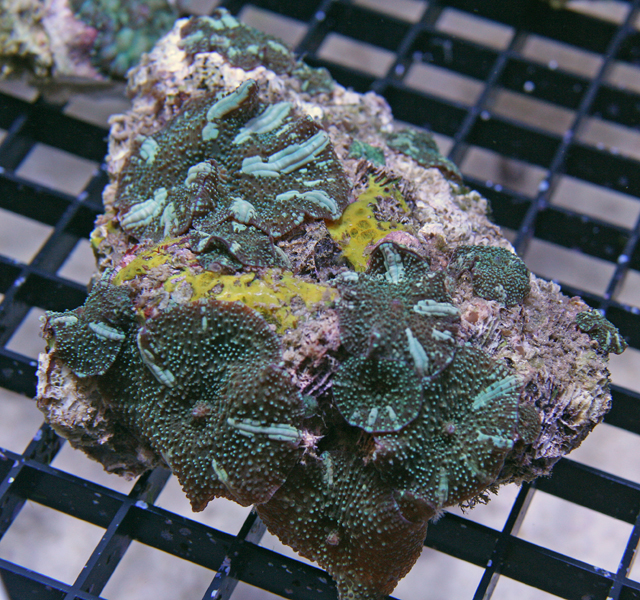 Common names for Discosoma spp. are forked tentacle mushrooms, umbrella mushrooms, bubble mushrooms, warty mushrooms, disc anemones, metallic mushrooms, and mushroom corals. Discosoma corals prefer stronger water currents in comparison with other corallimorphs. They also thrive in low intensity lighting. They can be found at a variety of water depths. Discosoma spp. are usually green, but they often have other colors incorporated in their oral disc, notably purples, blues, browns, and whites. The coloration is usually mottled in pattern. Typically, Discosomas have more texture to their oral disc than Actinodiscus. They might have warty or bubbly surfaces. Many Discosoma corals have the ability to move elsewhere, and are considered “motile”. Unlike Actinodiscus, many Discosoma corals will prey on fish, shrimp, and other invertebrates. They close their oral disc in a “purse string” manner. (Imagine a circle of fabric, with a string strung around the circumference. Pull the string, and it draws the edges together, leaving a bag shape.) These are less likely than other mushroom corals to grow in a colony. 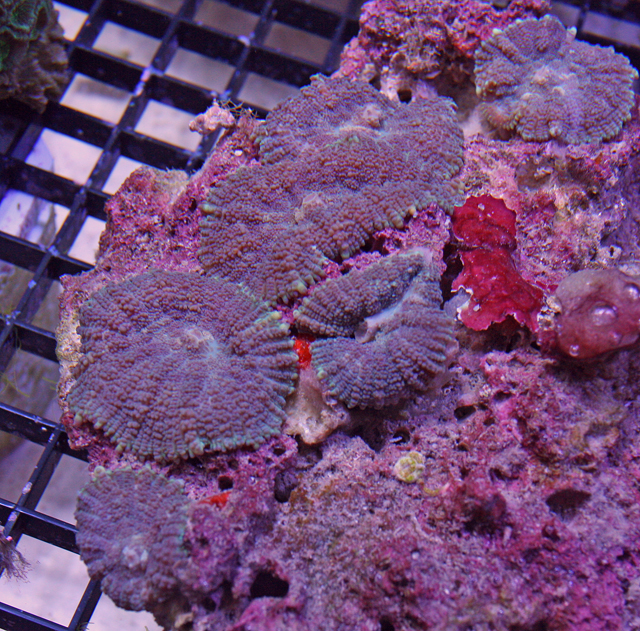 Common names for Rhodactis spp. are hairy mushroom, velvet mushroom, bull's eye mushroom, fuzzy mushroom, elephant ear mushroom, metallic mushroom, and mushroom coral. The papillae and verrucae of Rhodactis corals are quite prominent, lending them the velvet, fuzzy, and hairy common names. Elephant ear corals can be green, blue, brown, pink, and purple. Sometimes the tentacles are of contrasting color. These can tolerate higher intensity lighting than their counterparts, and are often found in shallow reef zones. The edges of the oral disc lack tentacles or are greatly reduced, giving the margins a contrasting appearance. Rhodactis corals also can grow scalloped edges on their oral disc, which is in contrast to the circular shape of other corallimorphs. This gives them their name “elephant ear” corals. Rhodactis spp. are considered to be more hardy than the other mushroom corals. They prefer low to moderate water flow.

This is the only genus in the family Ricordeidae. 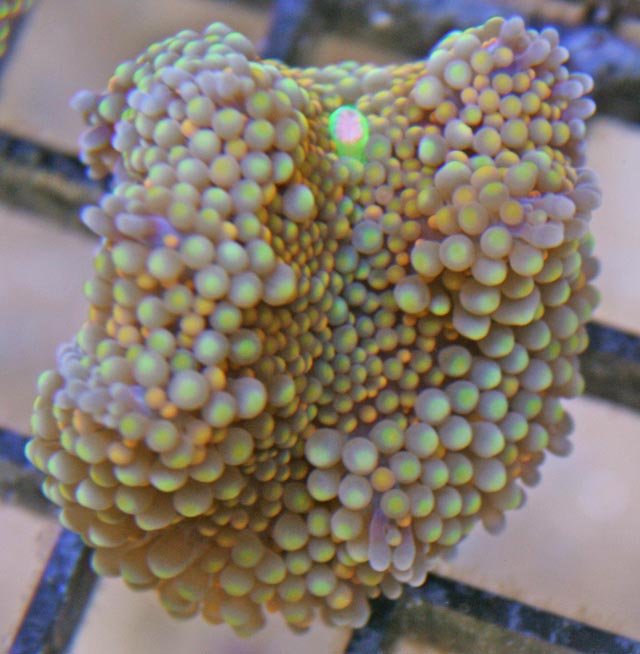 Ricordea corals may often be called simply by their species names, referred to as Floridas or Yumas. Ricordea spp. are noted for their pimply appearance, as they are covered with papillae and verrucae, sometimes of contrasting color. Compared with other corallimorphs, Ricordea corals tolerate brighter light and shallow reef systems. These can be blue, green, yellow, orange, and pink. The brighter colors are normally found in the more shallow waters. Darker colors are from deeper waters. The tentacles and polyps cannot retract, and the coral cannot move on the substrate once it is attached (compare to other motile corals that walk to new homes). These are commonly aquacultured, as it is banned to collect them from the Atlantic Ocean, where they are usually found. It is, however, still legal to collect these on small pieces of rock from Florida.

Mancini, A. (1992). Breeding the corallimorpharians in the marine aquarium. Freshwater and Marine Aquarium: October, 1992.