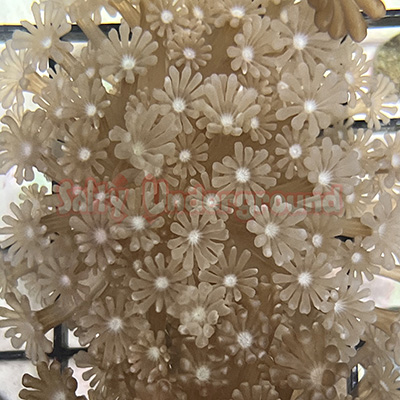 Have you ever wondered what a coral polyp is? Here is our quick guide to identifying coral polyps.

What is a coral polyp?

A coral polyp is an invertebrate meaning an animal with no backbone, examples of this are anemones and jellyfish. It is also the single living unit of a coral and the creature responsible for our coral reefs. One coral piece can be covered by thousands of coral polyps that in a group are called a coral colony. A coral can also consist of just one polyp, an example of this is the Scolymia sp..

A coral polyp has a sack-like body and an opening encircled by stinging tentacles called Cnidae. The coral polyp uses calcium carbonate from seawater to build itself a hard skeleton and it is this limestone skeleton that protects the soft coral polyp.

What do coral polyps eat?

Coral polyps are usually nocturnal which means they are closed during the day and extend their tentacles to feed at night. They can feed during the day if there is an abundance of food in the water such as zooplankton. Most reef-building coral will contain live photosynthetic algae called zooxanthellae, this zooxanthellae is what gives the coral nourishment to survive.