Many people ask if Berghia nudibranchs will eat majano anemones and what they look like. This article is created to help those people remove this invasive species of anemone from their reef tanks because Berghia nudibranchs only eat Aiptasia anemones.

Fortunately majano anemones are much easier to remove than aiptasia anemones. From my experience, the methods that will be described later in this article work well on majanos but is not very effective on aiptasia. This method is also a cheap, easy, and a quick way of removing majanos anemones.

To give you an idea of how effective, I started maintaining a 400 gallon reef aquarium after it had been set-up for about two years. This reef tank had 200+ majano anemones that were stinging and killing the corals. I first started used a mechanical method of removal of the anemones but this proved too time consuming and was damaging the live rock because they were so solid and covering such a large area. I quickly switched to a chemical means of removal that was able to kill the majanos in short amount of time and effort. 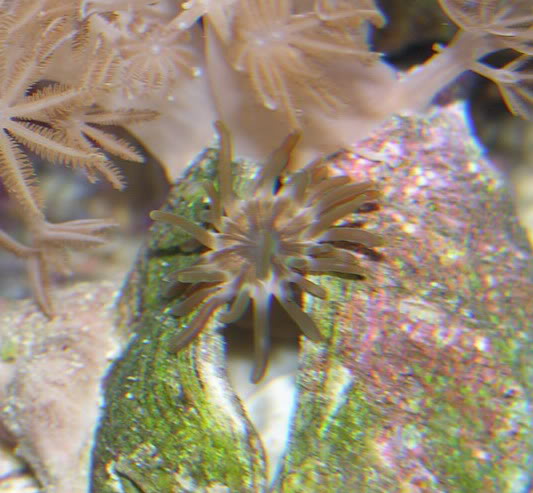 What are majano anemones?

There are two main anemone hitch-hikers on live rock that reef aquarist are most likely to encounter. The first is the Aiptasia sp. Anemone and the second is the Manjano Anemone. It is important to be able to distinguish between the two anemones because the method of anemone removal in this article is not very effective on aiptasia.

The Manjano anemone is also considered a ‘pest' and is equally capable of out-competing and overwhelming other inhabitants in the reef tank. Like the Aiptasia Anemone, it has a pedal column with a sticky foot that is used to attach itself to the rock surface and an oral disk surrounded by tentacles. The color is typically greenish brown to tan with the tentacles having white or light tips. This anemone can grow up to 3 cm (1.5 in) in diameter.

The main difference between the Manjano anemone and the Aiptasia anemone is that the tentacles of the Aiptasia are typically slender and very pointed at the tips, while the Manjano anemone has ‘stubby' tentacles that are often bulbous at the tips. The difference between the two anemones can be seen in the photos of the anemones on the aiptasia information page under which anemone is it</a >?

The chemical used for the Majano removal

The chemical I used to remove the Majano anemones was calcium hydroxide. It is commonly referred to as Kalk wasser, Kalk, and Pickling Lime. I bought my calcium hydroxide as Pickling lime in the canning section of the grocery store for about $5.

Other items that you will need to perform this process of anemone removal is a small bowl or container that you will use for mixing and an applicator to apply the paste. The applicator I used was a pipette but anything like a syringe or turkey baster will work.

The process of Majano removal with calcium hydroxide

First - Get the aquarium ready by turning off the power heads and pumps. It is much easier to apply the paste in an aquarium with no current. You also reduce the risk of harming anything other than the majanos.

Second - Mix the Calcium Hydroxide powder with just enough water to make a thick paste like the consistency of toothpaste but just a little thinner.

Third – Apply the paste over the whole majano using your applicator.

Fourth – Turn the power-heads and pumps back on after approximately 30 minutes. Watch to make sure that none of the paste lands on any corals and if it does blow it off quickly so they are not harmed.

Important: Concentrated Calcium Hydroxide is a medium strength base and will kill or severely injury anything it is applied to. Also, attempting to apply this solution to too many majanos at once may have a negative affect on the pH and alkalinity within your reef tank and the paste will be harder to control when the pumps are turned back on.

Remember that waiting to remove a majano anemone will just make the problem worse in the future and in some aquarium very quickly.