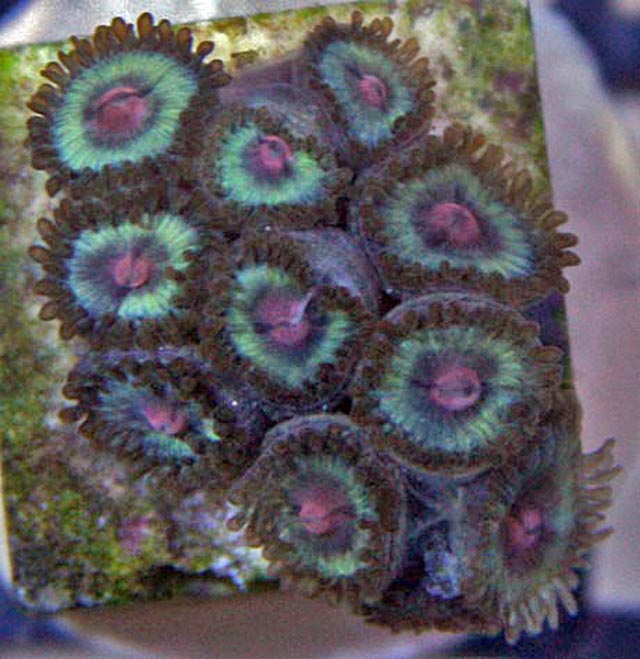 Zoanthid corals are found in the Subclass Hexacorallia (sometimes referred to as Zoantharia), Order Zanthidea, Suborder Brachycnemina, and Family Zoanthidae. Although the term Zoanthid can be used to describe all of the colonial anemones and button polyps, we are only going to discuss Zoanthidae at this time.

Zoanthidae corals are common in importation and in aquaculture</a >. You should have no trouble finding these available. They are considered to be quite hardy</a >. Typically, they are forgiving of various lighting conditions, and enjoy moderate to strong water current. In nature, they are particularly fond of high light intensity, strong current, and prefer to be closer to shore. 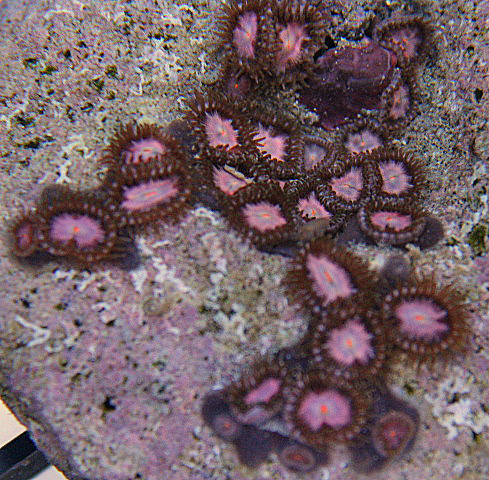 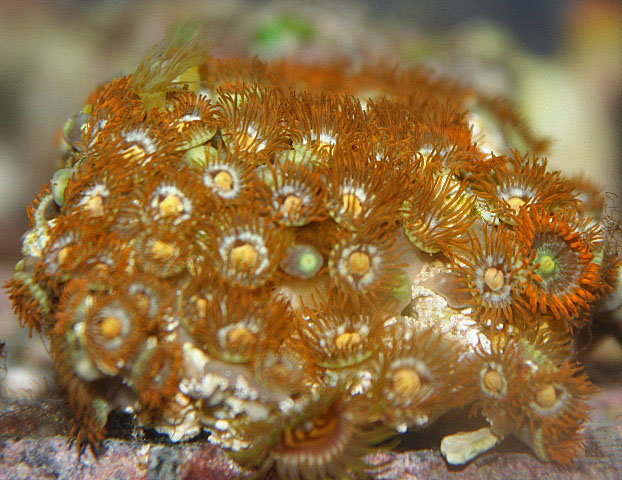 Zoanthids have several different growth forms, sometimes in the same colony. They can be solitary polyps or grow in colonies. Their colonial forms can be connected by stolons (runners from their polys) or a coenenchyme. The coenenchyme is tissues that is both an anchor and sometimes stalk for the polyps. It is comprised of a connective tissue called mesoglea, which has a lot of empty space in its tissue. This tissue is what gives the coenenchyme its form, being simultaneously stiff and gelatinous (It reminds me of stale gelatin.). When polyps are embedded in the coenenchyme without a stalk, the colony is typically considered massive. When the polyps are at the end of stalk, which emerges either from a stolon or coenenchyme, the colony is considered “connected”. Like other Hexacorallia corals, some Zoanthidae corals use bits of sediment in their coenenchyme for support. 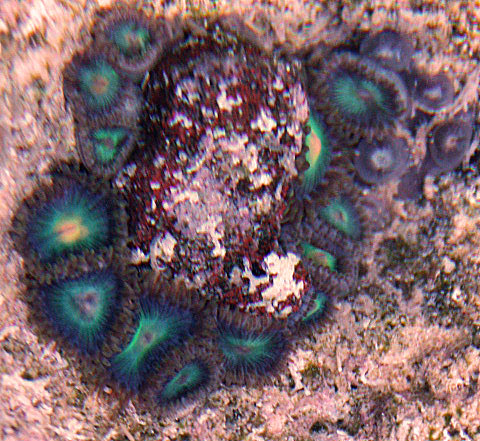 Their polyps have two rings of tentacles, which are reminiscent of double blooms. Zoanthidae corals, being in the suborder Brachycnemina, have an incomplete fifth mesentery. Mesenteries are sheets of tissue which divide the polyps symmetrically longitudinally. (Envision looking down on a polyp and dividing it like a pie chart.) For Zoanthidae, their fifth sheet of tissue doesn't quite make it to the center of the polyp, ruining the symmetry. Their skin has some chitin for protection, and is called a cuticle. It gives the coral a leathery texture. These corals will also have a coating of mucus, imbibed with the neurotoxin palytoxin described below.

Beware of palytoxin, the toxin produced by zoanthids. When working with Zoanthidae corals, wear protective gear. As related by Anthony Calfo in Book of Coral Propagation, the toxin is potent enough to retain its toxicity for several days. It can enter breaks in the skin, like through pores, eyes, mouth, or minor scrapes and cuts. In mild doses, the affected area will be numbed. In large enough doses, it can be fatal. Eric Borneman, in Aquarium Corals, notes that “indigenous Pacific tribes used this neuromuscular agent to tip spears in order to paralyze pray animals and enemies”. Despite this, the hazards can be easily avoided with proper protective gear and common sense. Keep hands and instruments away from your eyes, mouth, and pores, sterilize your equipment properly after handling, and wash your hands afterwards. Interestingly, palytoxin promotes the growth of tumors. It is now the subject of much cancer research. (This is one more reason to preserve our coral reefs! Protecting our natural resources can lead to advances in medicine.) 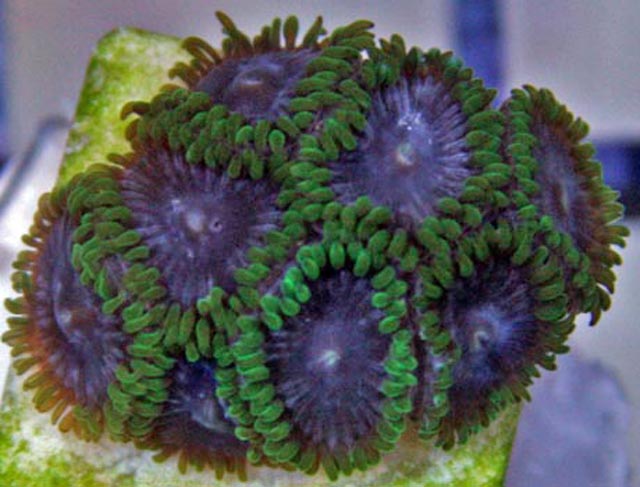 If you're still comfortable with zoanthids after learning about the hazards, they make great hardy</a > corals. They propagate well, through cuttings, daughter colonies, and stolons. Though they are dependent on photosynthesis via their zooxanthellae, they are still polytrophic (they acquire nutrients in more than one way). They absorb nutrients in the form of microfauna directly from the water. In addition, they will capture prey, similar to how anemones capture prey. They do grow quickly, and will often kill nearby corals, so give Zoanthidae corals room in your aquarium. In fact, since they do grow so quickly, it might behoove the aquarist to divide their Zoanthidae coral just to make sure it doesn't overgrow the aquarium, leading to a mono-specific seascape. Zoanthids come in many, often bright, colors. Sometimes these corals are aposematic, having bright warning coloration referencing their toxicity. These can be range from blues and greens to oranges and yellows, covering the whole color spectrum. 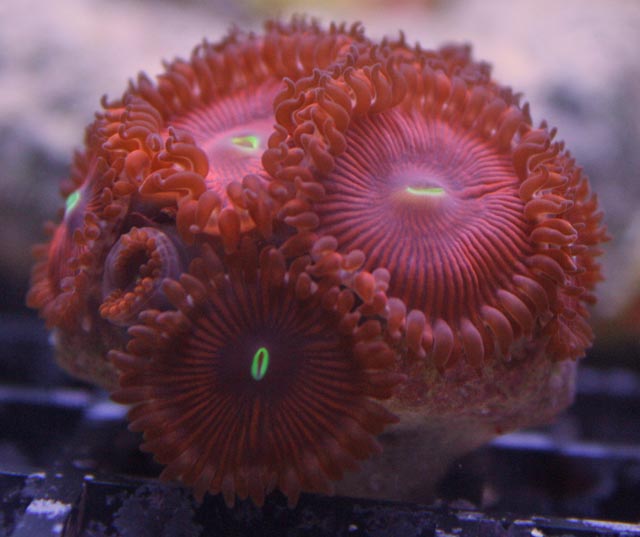 Common names for Palythoa spp. are sea mat and button polyps. They have large polyps or “buttons” which typically grow in an encrusting manner. Their “mat” or coenenchyme, will use sediments and debris to add to its support. For Palythoa corals, their polyps are embedded directly in the coenenchyme with little or no stalks and will grow in massive colonies of hemispherical form. The polyps are large, flat, and with shorter tentacles. 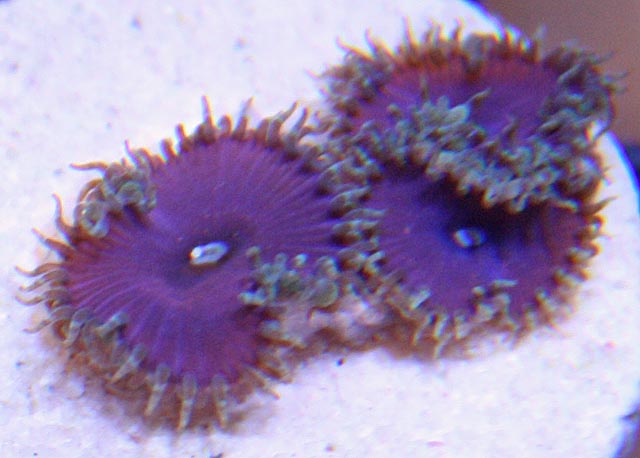 Palythoa colonies are usually found in shallow waters with moderate to high water flow, with typical zones being the reef crest and upper back reef slope. They are usually brown, yellow, green, or cream, with the polyps sometimes being of a darker shade than the mat. Although Palythoa spp. will tolerate a range of lighting conditions, they are healthier beneath high light intensity (as the light is brighter near the reef crest). These are fast growing, so give them some room in your aquarium. They will encrust over neighbors if other corals are placed too close to them. Palythoa corals can be aggressive feeders, and have been known to take prepared aquarium food in addition to plankton, and the energy from their zooxanthellae.

Common names for Protopalythoa corals are sea mat and button polyps. One of the main distinctions between Palythoa and Protopalythoa corals is its growth form. Unlike Palythoa spp., Protopalythoa spp. polyps are not encased in the coenenchyme. Instead, they grow stalks from the coenenchyme which terminate in polyps. They often grow as solitary animals, but will also be seen with the polyps crowded together, with the based connected by a mat or by stolons. Their polyps are large and flat, and their tentacles are typically longer and greater in number than Palythoa corals. Sometimes, their tentacle tips have a contrasting color or fluorescence, but normally, they are green or brown in color.

Protopalythoa spp. are found at many water depths. In the aquarium, however, they thrive in high intensity lighting and moderate to high water flow. They grow quickly, so they will need space in your aquarium. Their colony's mat will encrust over neighbors, and they also propagate through budding. Some hobbyists have had success with cutting the mat or the buds and moving them elsewhere in the aquarium. 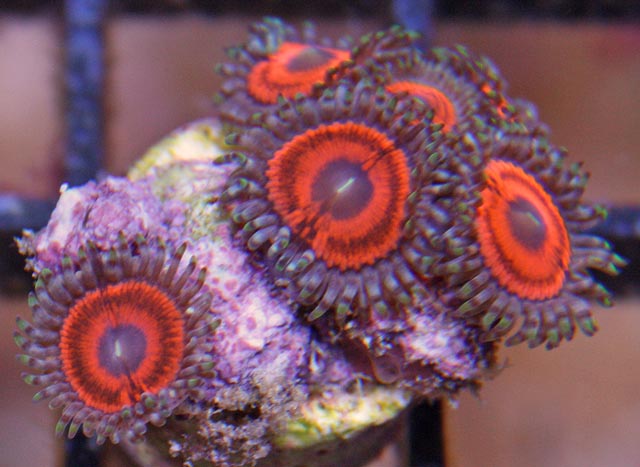 Common names for Zoanthus corals are sea mat and button polyps. Zoanthus spp. have smaller polyps or “buttons” than Palythoa and Protopalythoa spp. These are found in a variety of water depths, currents, and lighting intensities with each species having its preference. They are not aggressive feeders and rely heavily on their zooxanthellae in addition to feeding on microfauna and algae. Their polyps have a “dividing sphincter muscle surrounding the oral opening”, which distinguishes them from other genera (Borneman, 2001). Unlike other zoanthids, Zoanthus corals also do not integrate debris into their coenenchyme.

Zoanthus spp. are more brightly colored than the other zoanthids, which makes them more desirable in the aquarium hobby. Usually, their polyps have contrasting colors compared to their stalks and coenenchyme. They can be green, orange, gray, brown, blue, red, and yellow. Zoanthus corals are less vulnerable to bleaching than other corals, perhaps due to their ability to control the concentrations of zooxanthellae they posses.

Since they are so dependent on their zooxanthellae, Zoanthus spp. do best under high intensity light. These do not need to be directly fed, and will survive on photosynthesis and natural nutrients found in the aquarium water. They grow quickly and will form daughter colonies via budding, so give them space in your aquarium landscape.

Common names for Isaurus corals are tube polyps, king polyps, and snake polyps. Their stalks grow separately or may be attached by stolons. Isauras spp. are called tube polyps because their stalks resemble thin columns with stubby tentacles. They are commonly green, brown, and gray, and contain zooxanthellae throughout their bodies, not just in their tentacles. Their polyps typically do not extend in daylight. In the evening, their polyps open, extending clear to white tentacles for feeding. They can capture large prey, and do well with meaty commercial foods. They are tolerant of a variety of lighting conditions, and are long lived. These are less commonly available due to their subdued colors and lack of polyp activity during the day. You may still find them as an incidental import on live rock or with other organisms. More information is needed for this genus.

A common name for Acrozoanthus is stick polyp. These are usually gray to various shades of brown with long tentacles. This genus prefers to grow on the exterior of a tube created by some fanworms or polychaete worms. When they are available in the aquarium trade, they are usually shipped still attached to the tube, but the worm is missing. Without the worm, the substrate cannon be replenished. Eventually, the tube will deteriorate and the zoanthid will become detached. Although it is commonly available to hobbyists, more information is needed for this genus.