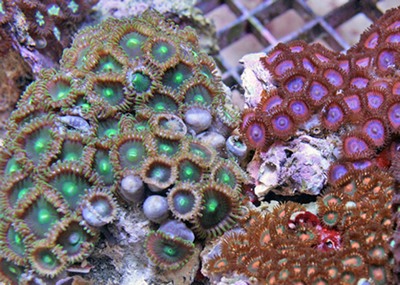 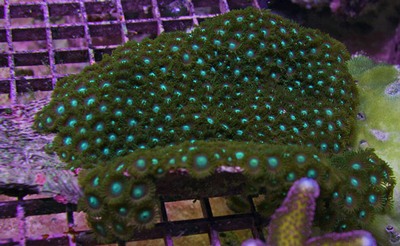 The Zoanthids family is a group of popular corals for marine aquarists. Not only are they commonly collected from the wild, but are frequently seen in the aquaculture industry. Hobbyists like zoanthids because they typically make hardy beginner corals, but they are attractive enough to appeal to the more sophisticated reef keeper as well. But what are you buying? How can you tell the difference between the big three: Zoanthus, Palythoa, and Protopalythoa?

Zoanthids have several different growth forms, sometimes in the same colony. They can be solitary polyps or grow in colonies. Their colonial forms can be connected by stolons (connective tissue or runners from their polyps) or a coenenchyme. The coenenchyme is tissue that is both an anchor and sometimes a stalk for the polyps. It is comprised of a connective tissue called mesoglea, which has a lot of empty space in its tissue. This tissue is what gives the coenenchyme its form, being simultaneously stiff and gelatinous. (It reminds me of stale gelatin.) When polyps are embedded in the coenenchyme without a stalk, the colony is typically considered massive. When the polyps are at the end of stalk, which emerges either from a stolon or coenenchyme, the colony is considered “connected”. 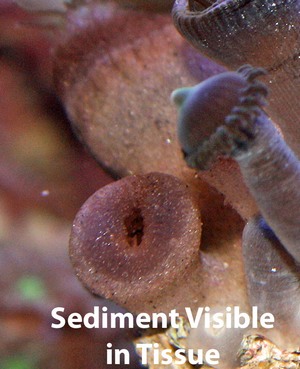 Some Zoanthidae corals use bits of sediment in their coenenchyme for support, like specs of sand, pieces of shell, and crushed coral (see image below). Over the coenenchyme is a coating of mucus, or “slime”, which is more prevalent in certain species than others.

To make an ID more difficult, different species and color variations of zoas, palys, and protopalys will grow side by side. Many people also use different names to describe the same zoanthids. Generally speaking, zoas have smaller, more colorful polyps, palys have larger, duller polyps, and protopalys have polyps on stalks that have more tentacles than the others and they do not grow from a thick mat. However, this is not always true, and the oral discs may be of different sizes in the same colony.

Below is a brief summary of the differences between just three of the genera of Zoanthidae: 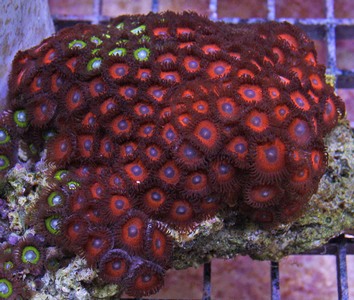 Zoanthus spp., or zoas, have a distinct sphincter muscle around their oral opening. The others generally lack this characteristic. Some hobbyists describe this as a “round” mouth for zoas and a “slit” mouth for palys. 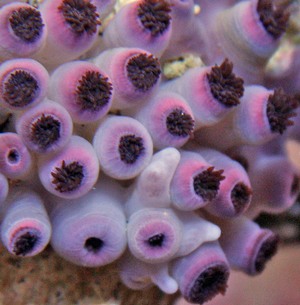 Additionally, zoas do not use sediment in their coenenchyme, or tissue. Their tissue is thinner and tears more easily than that of palys and protopalys.

Zoanthus are also the more colorful zoanthids, sometimes growing in bright colors of orange, blue, green, turquoise, red, etc. Zoas are likely to have contrasting colors between the tentacles and the oral disk. The polyps are grown in a mat of the coenenchyme, and they are embedded in the tissue (growing close to the mat). 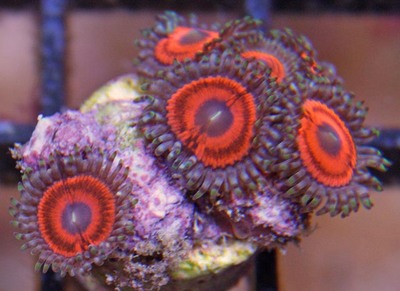 See below for a photo of some closed Zoanthus spp. The polyps are embedded in a mat, and lack sediment in the tissue. 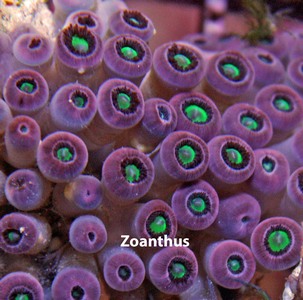 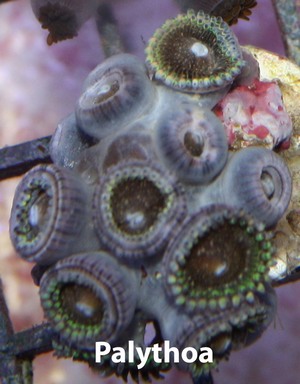 Palythoa spp., or palys, also grow in a mat of coenenchyme, just like zoas, with their polyps embedded. However, palys use sediment to help reinforce their tissue. If you look closely, you will see sand, shell, or crushed coral in their tissue. Many have observed that this is less obvious in aquacultured varieties. The coenenchyme is thicker for palys than it is for zoas, both to touch and to sight. Their “skin” feels rougher to the touch, as a result of the incorporated sediment. They are also often “slimier” than Zoanthus spp., with a thicker mucus coating. 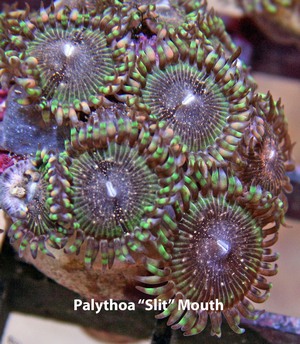 Palys generally have a larger oral disc than zoas, with shorter tentacles. Their oral discs lack the sphincter muscle surrounding the oral opening that is observed in zoas, with many people observing a “slit” mouth instead of a “round” mouth. Palys tend to grow in dome shaped colonies. Their colors are typically more muted that those found in Zoanthus spp. 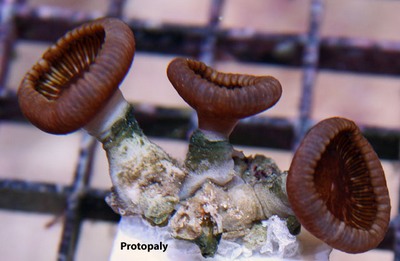 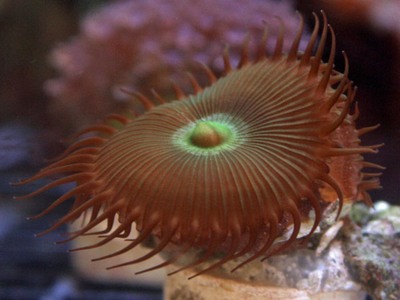 Protopalythoa spp., or protopalys, are sometimes grouped with Palythoa. However, protopalys have polyps on the ends of stalks instead of embedded in the mat. Their bases are connected by the coenenchyme or even by stolons, which incorporates sediment into the tissue just like palys. The texture of their coenenchyme also feels similar. They are found as solitary corals quite frequently.

If you see palys and protopalys side by side, you will notice that protopalys have a larger oral disc, longer tentacles, and sometimes a greater number of tentacles. Their oral discs may be quite colorful under blue actinic lighting, even fluorescing, but their coenenchyme is normally brown or green in color.

The photos below shows the protopaly tentacles are obviously much longer than a paly's tentacles. When closed, you can see that the polyps are raised on tall stalks. 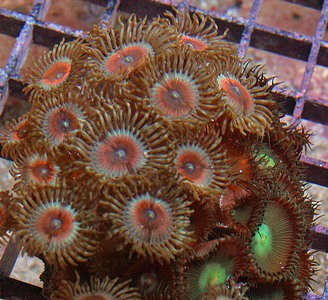 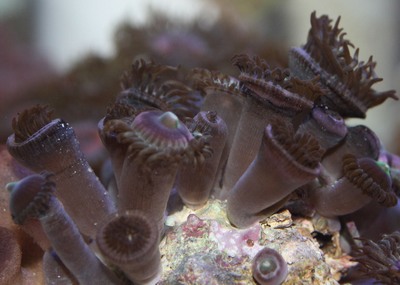 For more information, please read our article on Zoanthid Corals</a >.

Budding
asexual reproduction where a new coral polyp grows from a bud or extension of another coral polyp.
Coenenchyme
a tissue that is both an anchor and sometimes a stalk for the coral polyps.
Mat
a common name for the thick tissue connecting coral polyps resembling a solid sheet. AKA coenenchyme.
Mesoglea (also spelled as mesagloea)
a connective tissue which has a lot of empty space in its cellular layers. This tissue is simultaneously stiff and gelatinous and comprises the coenenchyme of corals.
Oral disc (also spelled oral disk)
the “top” of the coral polyp. It is a flattened circular disc of tissue with an oral opening (mouth) in the center and a ring of tentacles on its circumference.
Paly
common term for Palythoa spp.
Palythoa
a genus in the Zoanthidae family.
Protopaly
common term for Protopalythoa spp.
Protopalythoa
a genus in the Zoanthidae family.
Sediment
small fragments of rock, shell, and other detritus that settles to the ocean floor absorbed into the coenenchyme of palys and protopalys to strengthen the tissue.
Sphincter muscle
a circular muscle surrounding the oral opening of a zoa that constricts the mouth.
Stalk
an elongated, cylindrical part of the coral which holds up the coral polyp.
Stolon
a tissue which grows from the base of a polyp and will grow into another coral polyp through budding.
Tentacle
an extension of the coral polyp which radiates outward from the oral disc to aid in defense and food capture.
Zoa
common term for Zoanthus spp.
Zoanthid
common term for all members of the Zoanthidae family, including Zoanthus, Palythoa, and Protopalythoa.
Zoanthidae
a family of corals. They are found in the Subclass Hexacorallia (sometimes referred to as Zoantharia), Order Zanthidea, and Suborder Brachycnemina. Zoanthidae includes the following genera: Acrozoanthus, Isaurus, Palythoa, Protopalythoa, and Zoanthus.
Zoanthus
a genus in the Zoanthidae family.