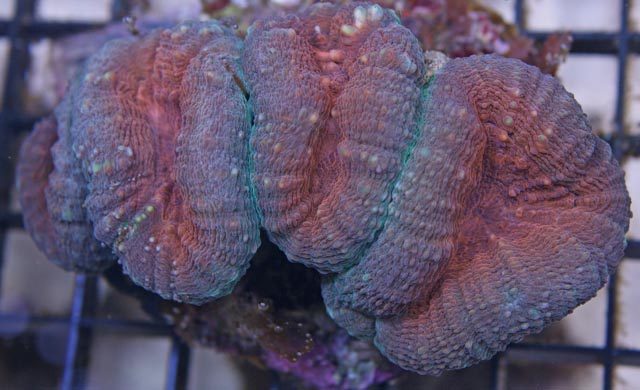 The Mussidae family of corals is in the order Scleractinia (stony corals) and the subclass Hexacorallia (or also known as Zoantharia). Being in the Hexacorallia subclass means that the polyps have tentacles in multiples of six. Some common genera of Mussidae corals found in the Indo-West Pacific are: Acanthastrea, Autalomussa, Blastomusa, Cyanarina, Echinomorpha, Indophyllia, Lobophyllia, Scolymia, and Symphyllia. This is by no means a complete taxonomy. For more detailed descriptions of each genus, please scroll to the bottom of the page. Isophyllastrea, Isophyllia, Mussa, Mussimillia, and Mycetophyllia are found only in the Atlantic and are unavailable to hobbyists due to trade restrictions. 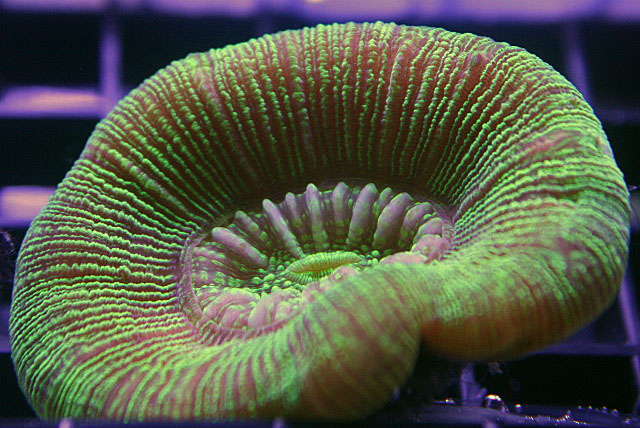 Generally speaking, Mussids have large fleshy polyps. Oftentimes, Acanthastrea spp. are confused with Faviids, and Blastomussa spp. can often be misidentified as Faviids or Corallimorphs (mushroom corals/disc anemones). However, by looking at their skeletons, you will be able to tell the difference between them. For example, Corallimorphs lack a skeleton. In some Mussidae corals, their thick polyp tissue will fill with water, giving it a typical swollen appearance. Mussids are particularly hardy corals, which may explain their popularity with marine hobbyists. They usually prefer low to moderate light intensity and low to moderate water current. However, it is a good idea to contact your wholesaler/retailer for the specific requirements for your specimen. Some species may have been collected in a different sort of environment, or been reared in captivity in particular conditions. Due to the fleshy tissues of Mussids, you should take care in handling them to prevent tearing. Also, be sure to remove filamentous algae, such as hair algae, as it is likely to grow around the rim, or margins, of the polyps. 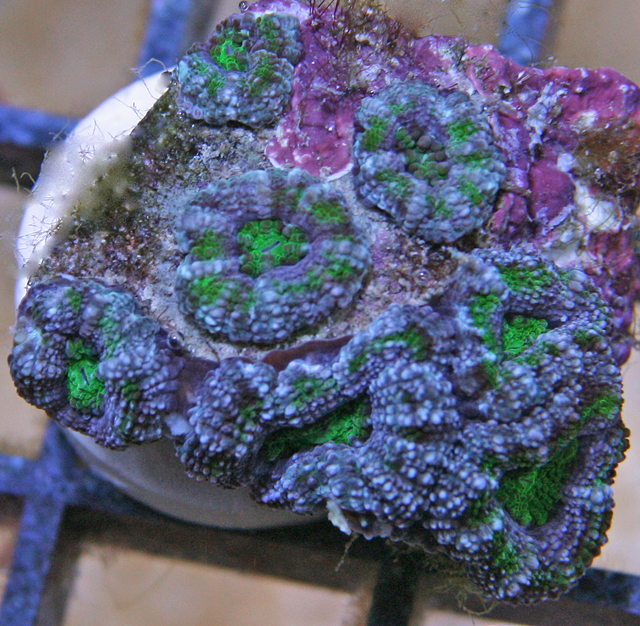 Common names for Acanthastrea spp. are pineapple coral, Acans, and are also sometimes referred to as Favia incorrectly. Acans are found throughout the Indo-West Pacific, particularly in Australia, Indonesia, Madagascar, the Red Sea, the Gulf of Aden, and off the coast of Japan. Their corallites are usually ceroid (meaning the corallite walls are fused, singly), and are rarely meandroid (the corallite walls are fused longitudinally). Though they are often confused with Favia spp., Acanthastrea spp. polyps have heavier tissue. These are considered to be quite hardy, and are numerous in the wild. Australian specimens make popular imports as they are less likely to have diseases or parasites than from other parts of the world. Normally, pineapple coral prefer moderate light and water current, but are found in a variety of reef habitats. They are noted for being tolerant for different light intensities, water depths, and water clarity. A. echinata is found in shallow water up to 50 m (150 feet), such as on reef flats and reef slopes. Acanthastrea spp. are symbiotic (containing zooxanthellae) and do not require direct feeding. These colonial polyps may be red, green, orange, blue, gray, brown or purple in coloration, and different color variations may change depending on lighting conditions. Be sure to place Acans away from other corals, as they are considered to be semi-aggressive. 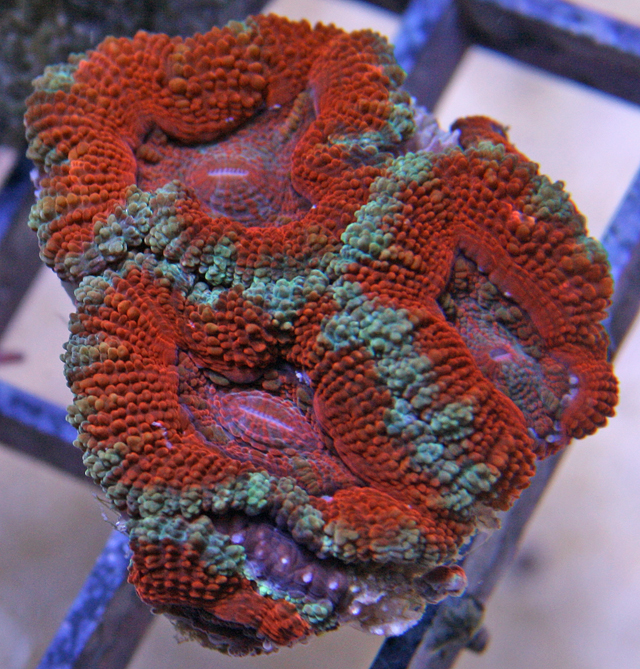 Common names for A. rowleyensis are A. rowley's and chalice coral (not to be confused with the other chalice corals from the family Pectiniidae). Though usually green, some specimens exhibit rainbow coloration, like those out of Timor Indonesia. A. rowleyensis are colonial, with dome or flat shaped colonies. Their corallites are fleshy with short tentacles, similar to Scolymia spp., and may be either cerioid or meandroid. Some hobbyists report that their A. rowley's thrive with target feeding for each polyp. As with other Mussids, they prefer moderate water flow and light intensity. In nature, Australomussa corals are found on the lower reef slopes.

Common names for Blastomussa spp. are pineapple coral, Blastos, and incorrectly referred to as brain or open brain coral. To help with any confusion, Blastos have phaceloid corallites, meaning their polyps arise separately on long stalks which extend from a common, central skeleton. When the polyps are extended, they hide the tubular skeleton, and resemble mushroom corals (corallimorphs). Since the corallites have a long tubular shape, they propagate easily via fragmentation. Blastos are normally brown or red in color, often with green centers or perhaps green candy stripes which radiate from the center. Some morphs have purple or maroon coloration. Pineapple corals are found in the Indo-West Pacific, Australia, and the Red Sea. Normally, Blastos can be found in murky, turbid waters of crevices and steep reef slopes in shallow waters up to 50 m (150 feet). Reflecting their natural environment, they prefer moderate light intensity and low water current. Blastomussa spp. are hardy aquarium corals, but they should be checked regularly for incidental organisms or an accumulation of debris among their branching, phaceloid corallites. You may need to wait until their polyps are retracted. These are not considered to be aggressive colonies.

Common names for C. lacrymalis are button coral, doughnut coral, cat's eye coral, meat coral, tooth coral. This is a very hardy coral for reef aquarists. It is a solitary polyp, sometimes free-living on muddy bottoms, but usually attached to rocky substrates, semi-buried, in protected reefs like on overhangs. These are beautiful, and come in a variety of colors like shades of brown, green, red, and pink. The tissue is often translucent, allowing you to see the “teeth” of the septa (the calcareous radial divisions of the corallite). C. lacrymalis has large primary septa, with smaller secondary septa occurring in a cyclical pattern around the oral disc. Feeding tentacles extend at night, and the polyp will thrive with regular meaty feedings. Button corals do best in low to moderate light and low water current, mimicking their natural habitat. They are not considered to be aggressive towards other corals.

Contrary to the other Mussids, E. nishiharai grows as encrusting colonies in thin sheets. Some taxonomists classify Echinomorpha with the family Peciniidae (containing the chalice corals) instead of Mussidae. E. nishiharai is common to Fiji, but is found throughout Indonesia to Japan. In the wild, Echinomorpha colonizes rocky substrates in shallow, protected reef slopes and crevices from 5-20 m (15-60 feet). This coral is rarely collected, and there are no statistics for it in the coral export trade. If you find a specimen, they are usually green or brown in color, but have been noted to be blue, orange, and pink, often with contrasting centers. Many hobbyists claim their centers “glow”. E. nishiharai are normally found with only one corallite, but oftentimes there will be several smaller corallites surrounding the central polyp. If you are able to get your hands on an E. nishiharai, they prefer low to moderate lighting and moderate water current. As with other Mussids, Echinomorpha will benefit from supplemental feedings of meaty supplements, like shrimp. This coral is not considered to be aggressive.

Common Species: I. cylindrica, I. macassarensis

Common names for Indophyllia spp. are button coral, tooth coral, and doughnut coral. Not much is known about Indophyllia spp. It is found in Sulawesi in Indonesia as well as Western Australia. It prefers low water current and moderate lighting intensity. They are semi-aggressive, so should be kept away from neighboring corals. These button corals are commonly seen in orange, green, blue, and purple. The tentacles are usually transparent, allowing for you to see the tooth-like septa beneath the tissue. Like Cynarina, Indophyllia corals are disc or oval shaped solitary polyps with thick tissue. The tissue surrounding the corallite may inflate with water, giving it a doughnut shape. When the polyp is mature, it may become motile in your aquarium. As such, it is recommended to place it in a sandy substrate at the bottom of the aquarium. If placed at a higher level, on rocky substate, it is quite possible it could fall, damaging the coral. I. macassarensis is becoming more common in imports, and is typically considered to be hardy. 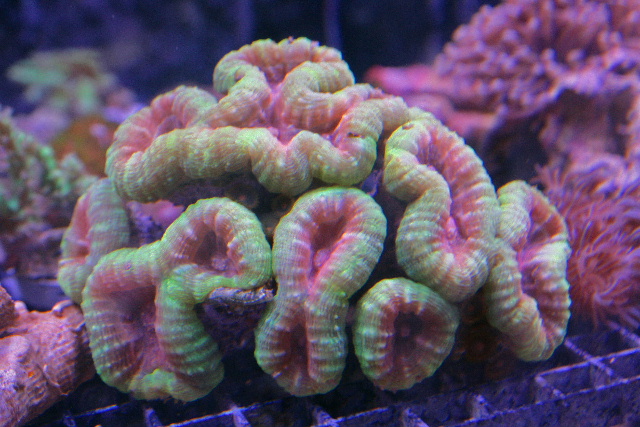 Common names for Lobophyllia spp. are brain root coral, large brain root coral, open brain coral, meat coral, and Lobo (you can figure that one out). These can be orange, blue, red, green, or brown. Oftentimes, the centers have a contrasting color. The polyps are large, fleshy, and meandroid-meaning the corallites are fused longitudinally. What is interesting about the corallites is that they extend separately from the skeleton, being flabello-meandroid or phaceloid. Sometimes the corallites will branch. When the polyps are extended, they completely hide the skeleton and obscure the fact that the corallites are tubular in shape. Lobophyllia spp. do enjoy meaty supplements on a regular basis, and will extend sweeper tentacles. They are considered to be semi-aggressive, and should be placed away from other corals in your aquarium. Unlike the other Mussids, open brain corals enjoy moderate to high intensity lighting. They are found in the Red Sea and Indo-West Pacific in shallow waters up to 50 m (150 feet). It occupies a variety of reef environments, and enjoys moderate water current. This is considered to be a particularly hardy genus. 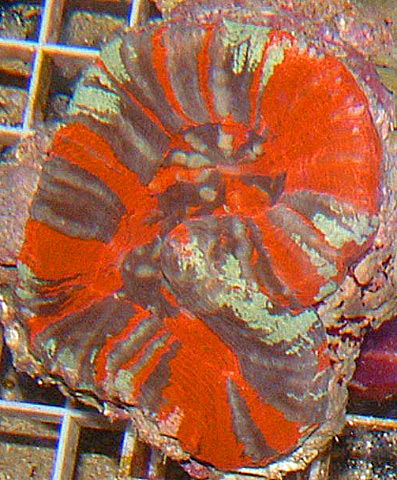 Common names for Scolymia spp. are artichoke coral, doughnut coral, disk coral, and button coral. This is another solitary polyp coral, usually with only one mouth, but some species are polystomatous (containing more than one oral opening for a single polyp). These can be red, green, blue, or brown, and will often form encrusting plates on a rocky substrate. Like the other Mussids, it thrives with added meaty supplements, and extends its feeding/sweeper tentacles at night. Scolymia spp. need moderate light intensity and moderate water current to be successful. Although they are considered to be a passive coral, you should still give them room in your aquarium. The fleshy polyp will expand to twice its size once inflated with water. Scolymia spp. attach to the substrate via a stem. The Indo-Pacific species are found up to 50 m (150 feet). S. vitiensis is considered near-threatened by the IUCN, mostly due to targeting from the aquarium trade and general degradation of coral reefs on a global scale due to climate change. S. vitiensis and S. australis are normally found on deep reef slopes. These are considered to be hardy reef specimens, but are prone to bleaching in the wild due to environmental factors.

Common names for Symphyllia spp. are brain coral, closed brain coral, dented brain coral, Pacific cactus coral, and meat coral. The polyps are fleshy, and the corallites are meandroid. These are different from the Lobophyllia spp. in that the corallite walls are completely fused, and not flabello-meandroid. Some hobbyists also confuse Symphyllia spp. with Acanthastrea spp., but Acans are ceroid while Symphyllia colonies are meandroid. The polyps can be green, yellow, cream, orange or flourescent orange, red, blue, and brown. Oftentimes the “valleys” or corallite centers are of contrasting colors to the corallite walls. Colonies are commonly massive or dome-shaped. Generally speaking, Symphyllia spp. prefer moderate light intensity and moderate water current. They are not considered to be aggressive. The most common import, S. wilsoni, is found in very shallow waters in the subtidal zone or on ironshores between 3 and 15 m (6-45 feet) in Southern Australia. This is considered to be a hardy aquarium species.